eTennis League is a flex tennis league that allows individuals to play with local players of various skill levels. It is currently available to adults but juniors league is already in the works. Through this platform, tennis enthusiasts will be able to chat with each other, set up friendly exhibition matches, and find other tennis players who are around their same skill level. eTennis League allows the players to create a community of tennis players within their vicinity.

This platform also introduces year-round competitive leagues, where players compete for cash prizes. The entry fee is $25 per person. The champion will receive a trophy and $8 for every player competing in the league. To know more about this new venture, I conducted an exclusive interview with the company. 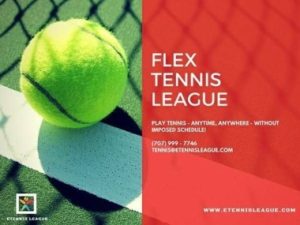 Please see the exclusive interview below:

TF: When did eTennis League start?

ET: eTennis League was founded back in 2013.

TF: What is the main goal behind the website?

ET: Since our founder is a tennis player himself, who competed in San Diego regular and flex leagues for years, he has seen both the good and the bad in competitors’ leagues. He wanted to take the best aspects of the existing solutions and combine them with all the features he knew the competitors were missing, and that’s how eTennis League was born. One of the features was a website (platform) which would serve as a social hub for tennis players (help them get together, play tennis and improve their overall game), and as an advanced system that would help the division players communicate, arrange matches, enter scores, rate their opponents, make memos about their game, etc.

TF: What’s the idea behind the logo?

ET: The idea behind the logo is following: the little player’s limbs represent the four tennis seasons (spring, summer, fall and winter) and the colors are chosen to correspond to each season. And, of course, we have chosen a tennis ball as the player’s head.

TF: Any key cities you have targeted? Will be targeted in the future?

ET: Currently, we organize leagues in US only, but that doesn’t mean a foreign country is not an option. Our main cities are Atlanta (GA), Houston (TX), Dallas (TX), San Diego (CA) and Tampa (FL), but we also targeted and organized leagues in the past in Los Angeles (CA), San Antonio (TX), San Jose (CA), San Francisco (CA), Sarasota (FL), Austin (TX). Basically, we can start a league in any city that has enough registered players of a certain skill level on the platform.

TF: How do you give the prizes and trophy?

TF: Any plans to expand the leagues in Asia?

ET: Although we haven’t had actual plans to do it in the past, lately we have been receiving more and more messages from players in Asia, who look interested in competing in our leagues. We might just evaluate the market and perhaps expand in the future. Tennis is extremely competitive sport, we love it, and we want to help players compete, so why not?

TF: Do you have any sponsorship or affiliate program?

ET: Yes, we do. As our main goal is to create truly competitive leagues, because it will make both us and players happy, we offer Affiliate and Ambassador programs. A player can become an Affiliate if he/she uses the Affiliate Link to invite other players to join the league. In the invited player joins a league, the Affiliate gets $15 (per invited player who registers).

The Ambassador program is intended for players who are really interested in getting involved with helping an existing league evolve or with helping to start a league in a new city. An Ambassador’s job is: on-site distribution of eTennis League flyers (tennis clubs, players you already know, new players), social media and email promotion of dates, times and other details concerning the leagues.

In return for the work the Ambassador puts in for developing our leagues, we would send Ambassador Gifts every season. The types of gifts would depend on the league size and involvement (from sweatbands and T-shirts to rackets and tennis shoes). The more an Ambassador gets involved, the bigger and more valuable the prizes. If we manage to organize a serious league with 100+ players, the Ambassador would become our Sponsored Ambassador, and we would send him/her valuable tennis equipment. If the Ambassador helps us maintain good leagues season after season, we would make him/her Premium Ambassador.

If you are a tennis enthusiast. you can sign up for eTennis League. You’ll be able to hone your skills and improve your socialization skills. The eTennis League platform gives you the opportunity to build a community with other fellow tennis players in your area.

For more information, you may reach out their official social media accounts: